How to Pick the Perfect Portable Emergency Generator

In the past, enduring a power outage was as simple as starting the fireplace. Not anymore; without electricity, basements can flood. Security systems can falter. Home businesses can be hindered.

We don't realize how much we rely on electricity until it's gone. In a pinch, converting a portable generator into an emergency backup power system is a step in the right direction.

You could count every light bulb in your house and calculate your exact wattage requirements, or you could simply select one of three sizes: Medium, Large or X-Large. 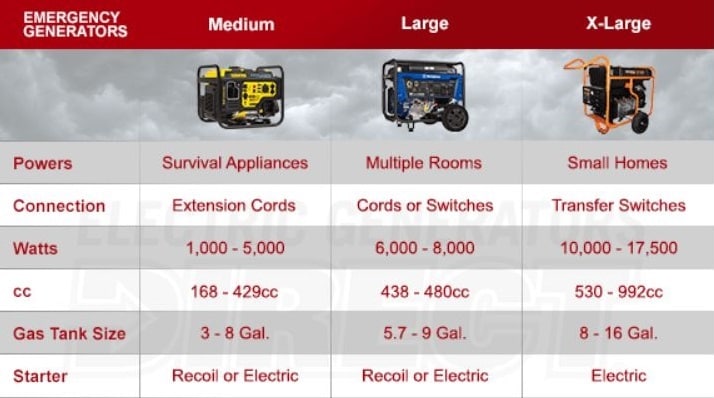 Don't let the name fool you. Medium emergency generators (3,000-6,000 watts) may be relatively small, but they pack a good punch.

Most homeowners simply run the generator outside and string extension cords through an open door or window to the inside appliances.

If you want to thrive instead of just survive, consider a large emergency portable generator (6,000-9,000 watts) instead.

Yes, you can string extension cords from the generator. But, you won't be able to tap its full potential.

Instead, large generators work best with manual transfer switches that can restore power in up to 10 circuits in your main electrical panel. In other words, they can energize multiple rooms in your home (minus a central air conditioner).

If you want the strength of a home standby generator without the shackles of being tied down, get an X-Large portable emergency generator (10,000+ watts).

While an electric start is standard on most X-Large models, they are NOT automatic. Unfortunately, if you're not home, the electric start button won't press itself.

Learn More: X-LARGE Emergency Portable Generator
For long-term outages, you will want a more permanent solution, such as a home standby or whole house generator. However, for shorter outages, Medium, Large, and Extra Large Generators should do the trick, depending on how much you want to power.

NEXT: What Kind of Generator Do I Need for My Home?
Related Articles

How to Pick the Perfect Medium Gas Generator

How to Pick the Perfect Large Gas Generator

How to Pick the Perfect X-Large Gas Generator

How to Finance Your Backup Generator Purchase
Hide